My dear friend and collaborator in secularism, Jaakko J. Wallenius, passed away on June 11, 2013, just two days ago. He had suffered from cancer for a long time and it turned out to be incurable. Jaakko died at home, nursed by his brave and loving wife Marjaliisa.

Jaakko was very open about his illness and wrote blogs and Facebook posts about it ever since he found out about his cancer. He was an active writer on secular and philosophical issues too until the very end. Jaakko himself was an Epicurean, and thus he faced his inevitable, early death with astonishing courage and calmness. There was a great amount of Stoicism too in his outlook and he didn't falter when the end came.

Epicureanism, Stoicism, and the garden of love

Only a couple of days before his death Jaakko posted to his Facebook profile a beautiful photo of himself among lilacs, mentioning how lovely their smell is in the early summer days. Of course Jaakko perfectly knew that this was his last summer, indeed his last days, and the last chance to enjoy the fragrance of his dear flowers. He also loved gardening, as every true Epicurean does. The garden is a symbol of human life, the growth of a soul towards wisdom. Jaakko had a small hut in his garden where he wrote his blog posts and read his books.

Jaakko knew computers and fixed them for extra income, calling his company "The Bit Doctor", but his real occupation before getting ill was journalism. On the side of this, he produced an unbelievable amount of hard thinking and excellent blog posts, both in Finnish and English.

Jaakko was also an avid reader. He read great amounts of books on history, religion, atheism, secular humanism and philosophy. What he learned from these works he summarised in his blog writings. Jaakko's span of subject matters was large and he showed how a person can and indeed should interpret and combine many different ways of thinking into a coherent whole: Make it your personal view, do not ape others. Be original, do not follow the masses. Dare to challenge the public opinion if it's obviously in error. Be brave, be strong. Never submit to any authorities. Think for yourself.

The highest praise I can give to anyone is to say that the person is benevolent, courageous and just. Jaakko was all of these. He was a peace-loving man, but nevertheless a stalwart in a debate. Jaakko wasn't pugnacious, quite the opposite. Of course he sometimes got angry during a heated argument, like any of us, but never did he acted rudely towards an opponent. Jaakko was also a forgiving and tolerant person. Despite this, he didn't pull any punches when it came to defending secular society, human rights and civil liberties against any totalitarian mind-control ideology, authority or unjust state system.

Jaakko's character was very warm and kind. He had a lovely smile and great sense of humour. Jaakko was brilliant, sharp, a fast thinker indeed. His voice was gentle and he could formulate his thoughts coherently in a matter of seconds. He was great company, whether it was serious work or just having fun among friends. Jaakko had a beautiful soul.

All in all, everyone I know greatly loved Jaakko. He more than deserved it.

I got to know Jaakko in the late 2007, when an acquaintance of mine told me about his writings on Islam. I remember having read an excellent analysis, though brief, by Jaakko, on Sam Harris, from the Free Thinker, the journal of the Finnish Freethinkers' Union. I had just joined the organisation and Jaakko's article was a brilliant piece of decent journalism among badly written amateur stuff. Back then the journal wasn't too good.

Sometimes after that the acquaintance of mine suggested that Jaakko, I and two other persons should perhaps gather together and form an unofficial think-tank on the problems Islamic fundamentalism posed for liberal democracy and secular society. The issues we wanted to tackle were, among other things, women's rights, the rights of sexual minorities, freedom of speech and religion, and of course the harsh treatment of atheists and secularists under Sharia.

Our plans never got realised to the full extent, never quite bloomed, but we met a few times, though without Jaakko, since he lived in Lohja, and worked late. We communicated with Jaakko via e-mail and wrote pieces for different magazines and newspapers.

Jaakko and I had blogs even back then and we were the first here in Finland to treat Islam like any other religion, that is, we began to criticise it despite the danger of being labelled as far-right bigots and racists. Of course, from the context of our writings, any decent person could immediately see that we were neither. Nevertheless, there had just emerged some nasty nationalist bloggers who demonised Islam and Muslims, so we had to tread carefully indeed. We didn't want to spread any hate or intolerance, quite the opposite.

Free Thinker and The Humanist

Immediately I recruited Jaakko, knowing his skills in writing excellent pieces on secularism, history and religion. I formed an editorial board for the Free Thinker, and among others, Jaakko and my other close friend, Tapani Hietaniemi (also, sadly, deceased, in 2009) were nominated.

Tapani Hietaniemi, a learned university docent, a great secularist and political spin doctor par excellence, valued Jaakko very high from the very beginning. Tapani actually wanted to have a piece by Jaakko for every single issue of Free Thinker. Jaakko was such a good writer. Unfortunately this didn't happen, but fortunately Jaakko wrote some great pieces for the Humanist too. One chief contribution of Jaakko was translating a long article by Sam Harris for the Free Thinker. Jaakko also contacted Sam via e-mail and got the translation rights directly from him. I made that a cover story of that particular issue. Jaakko did his translation for nothing: he wouldn't even ask for a fee. 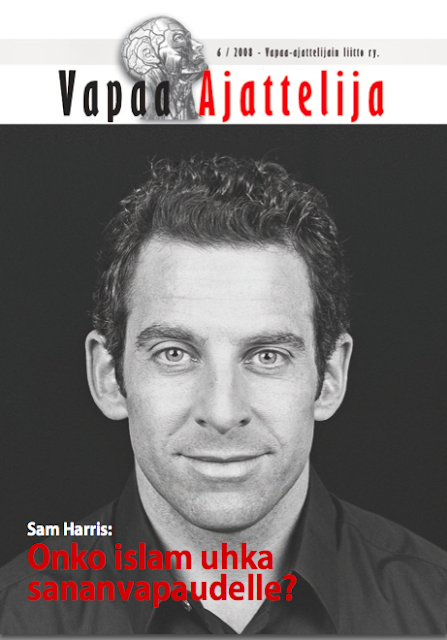 Moreover, Jaakko participated in the reworking of the mission statement and the programme - the list of working principles - of the Finnish Freethinkers' Union and contributed many valuable points. He was such as sharp thinker and could form brilliant sentences on the spot. He closed his eyes, thought about it for a moment, and our of his mouth came a perfect, finished sentence, that only had to be written down. Sadly our new programme and mission statement never saw the light of the day, due to some inner skirmishes between different fractions within the Freethinkers' Union.

What Does New Atheism Mean?

In 2010 I got a chance to edit a collection of essays for a book called What Does New Atheism Mean? Jaakko was on my mind at the very outset, but another guy told me that he wanted to write a piece on Islamic fundamentalism and the threat it posed to the Western societies.

However, this guy cancelled his participation just when the book was about to go to print, so I immediately contacted Jaakko, knowing he could produce almost anything in a matter of days. Jaakko gladly replaced the other person on very short notice indeed and sent me a collage of some of his older blog texts on Islam in an essay form. I just had to edit it a bit. Jaakko, in effect, saved my sorry ass. Otherwise I would have had to write that piece myself and I already had my hands full of editing and writing my own contributions for the book. 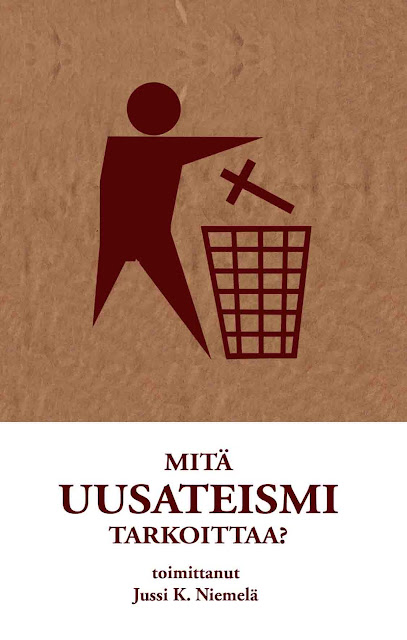 I think Jaakko was very happy in the end, as the collection came out, having had a chance to contribute for this important book. Jaakko's subject matter was difficult, but his essay managed to portray the problems of Islamic thinking for a liberal Western society in a very balanced and calm fashion. Jaakko was always constructive in his criticism. He loved to build bridges, not burn them.

During our initial brainstorming via e-mail in November 2007 I told Jaakko that I had participated in secular and atheist action on MySpace in 2006-2007. Then we both moved to Facebook and Jaakko immediately got in the business with a vengeance. He had already blogged in Finnish on his "Ajatuksia olemisesta" blog, but now he began to write also in English and spread the word among his Facebook friends. He got known very rapidly and people liked his writings. His English blog is called "Being Human".

On top of Jaakko's own posts, he gradually founded several thinker pages, and collected and shared many wise quotes from the most brilliant minds among humanity. I think there are over ten fan pages on Facebook, for Epicure, Bertrand Russell, George Orwell, Seneca, and others, that Jaakko put together and administered. I still cannot fathom where he got the energy for all this.

This huge internet activity is the major legacy Jaakko left behind for us. He comforted and taught us, providing the wisdom of ages for anyone interested in philosophy, rationalism, secularism and scientific thinking. In short, he was a great educator of humanity.

Having discussed with Jaakko many times and having read his writings it immediately became clear to me that deep down we were soul brothers.

The criticism of thought control systems of any kind was very important for us. Jaakko wrote important pieces on communism, fascism, Christianity and Islam from the perspective of mind control. He propagated freedom of thought, that is, free spirit. Any shackles are of course a major hindrance to human growth. Mental shackles are the most harmful of them all as far as personal growth is concerned. Jaakko wanted to liberate individuals from these shackles.

Jaakko had a Popperian point of view on liberty and science; he was a staunch supporter of Popperian fallibilism as a scientific method. He applied Popperianism to human rights and civil liberties too, having read and loved Popper's famous work The Open Society and Its Enemies.

As mentioned above, Jaakko's personal philosophy was Epicureanism. He learned it well and applied it to his everyday life. This helped him, in the end, to die peacefully, at home, despite the terrible agonies caused by his cancer.

I would like to say in the end of this brief memoir that Jaakko made an indelible impression on everyone who met him or read his writings. Though Jaakko in person isn't here anymore, his thoughts and writings continue to grow within us. Let us not forget him and his work. Jaakko deserves the best and I believe he made each of us a little better person through his loving presence and wisdom. Though the man is gone, his effect on us is only beginning. His influence never dies.

Rest in peace, my dear friend. You were the salt of the earth.

Jussi K. Niemelä
"He is laughing, with a touch of anger in his laughter, but no triumph, no malignity. It is the face of a man who is always fighting against something, but who fights in the open and is not frightened, the face of a man who is generously angry — in other words, of a nineteenth-century liberal, a free intelligence, a type hated with equal hatred by all the smelly little orthodoxies which are now contending for our souls."